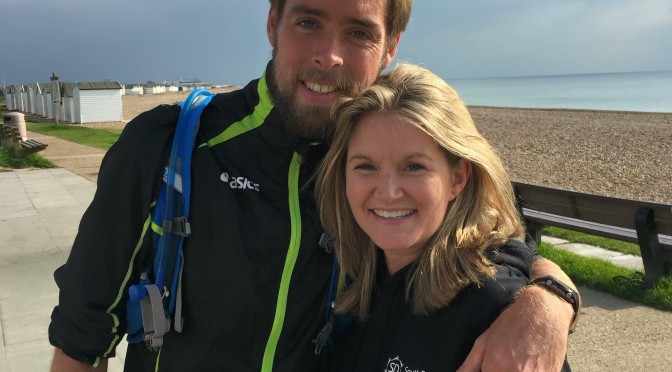 On Saturday 16th and Tuesday 19th April Ben Smith of the 401 Challenge will be running marathons in Storrington and would love as many people as possible to run some of the route with him.

Ben is aiming to run 401 marathons on 401 consecutive days all around the UK in order to not only break a record but also to raise £250,000 for charities Kidscape and Stonewall. By the time he gets to Storrington he will be on marathon numbers 229 and 232, having started last September.

You do not have to run far or fast! Ben welcomes everyone to run him; you can join him for a mile, 26.2 miles or anything in between. He runs at about 11 minute mile pace which, if you have any experience of running is a gentle pace. He stops regularly for breaks and refreshments too.

He will be setting off from Chanctonbury Leisure Centre car park at 10am on both mornings. He will be doing a 13.1 mile route twice, around Storrington, along the bottom of the Downs, through Parham to Amberley and back to the Leisure Centre.  As part of the Tuesday run he will be going to Rydon and Storrington First School to run with the children.

Ben also welcomes non-running support too. He is living in a mobile home while he completes this challenge so if you could offer him a cooked meal or a load of washing doing then that would be great too!

By the end of Tuesday 19th April Ben will have run a total of 232 consecutive marathons. This amounts to 6,078 miles which is the current distance from Bristol, UK (Ben’s start location) to Bangkok, Thailand (if Ben could run across water!). Ben has already broken the Guinness World Record for most marathons run in most consecutive days, the male record currently stands at 52 however we will be submitting our evidence for 401 marathons at the end of the challenge. Ben has participated in 3 official marathons but will complete a total of 11, including the London marathon by the end of this project.  Since September 1st 2015 ben has ran his way through 10 pairs of running shoes.

We have currently raise just £38,000 for our two chosen Anti-Bullying charities Kidscape and Stonewall via our Virgin Money Giving fundraising page. We have also launched an online store that provides technical running wear  for adults and Anti Bullying T-shirts consisting of motivations messages for children.

Part of this challenge is to raise awareness of the shocking effects bullying can have on an individual. Ben has already visited a number of education establishment to deliver motivational talks to young people about his experience of bullying and why he has decided to embark on this mammoth challenge.

Ben has also been recognised for his education outreach work and has been awarded both the Braveheart and Public Choice awards from North Somerset Mercury Heroes Awards, 2015. Ben was also shortlisted for the #GivingTuesday Charity Champion and Fundraiser of the year from the Charity Staff Awards (Winners will be announced on March 4th)